I caught two of Target Margin Theater’s set of Russian-inspired performances at the Bushwick Starr in Brooklyn recently. The Bushwick Starr is a non-profit place for performance, dance and puppetry in Brooklyn. You could almost miss the door walking down Starr Street, unless you knew it was there. Up the old wooden steps and inside the theater, the space was overflowing with people from the community in the hallway and at a tiny bar, waiting for the show.

Symbolic, ironic, bawdy, psychological – the productions were most of all, alive. The show was sold-out the night I went. The vocal and responsive, young audience overflowed onto the stairs between the rows of seats. Yes, theater is definitely growing in Brooklyn. 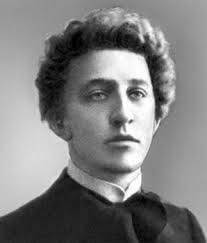 The Puppet Show, by Alexander Blok, was redesigned by artist Carolyn Mraz and directed by Sherrine Azab. In the one-act symbolic play, a jester god and a concealed death toyed with a lover and a scholar as they wandered through life and love. Death was cast as a woman dressed in white who seemed to be a pregnant bride, but who carried a scythe at her back.  Death was the object of both love and fear but won over both scholar and lover, and even the poet author. The complicated story wove themes of Eros and Thanatos together, as death was loved and desired in the play. The creative set design was surprising and transported me to a dreamy Russian countryside stalked by a very clever “death”.

The young actors, Joe Gregori, Caitlin Harrity, Stacy Osei-Kuffour and Lillian Rodriguez were each vibrant – amusing and haunting – they left me thinking about the meaning of the play for days. Alexander Blok, 1880-1921, a symbolist poet, saw the Russian revolution coming as a kind of apocalypse as a young artist. And part of the short play was apocalyptic with chaotic destruction of a cardboard city which was frankly violent. Blok influenced other important and favorite writers who followed, including Anna Akhmatova, and Vladimir Nabokov. But in the end, Blok felt, “She did devour me, lousy, snuffling dear Mother Russia, like a sow devouring her piglet.”

The danger of being consumed by mother Russia was felt in the second play, Trioka, A Concert Play, developed by lead artist Kristine Haruna Lee. The “Oberiu” group of male writers in Leningrad were the subject of the tragic comedy, dream-like show. The irreverent Oberiu were Aleksandr Vvedenskii (1904-1941) Daniil Kharms (1905-1942), and Leonid Lipavskii (1904-1941). The play took us on a journey from their inspired creations as authors, and Daniil’s haunting dreams.

But it continued right through to their persecution and as enemies of the people. They were executed, even Daniil – who wrote children’s books the government found subversive – in 1941 – 42. The books were absurd and playful, like the one here showing boys imagining themselves as transportation vehicles. The young actors (and singers and dancers) Stevo Arnoczy, Andrew Butler, Matt Carr, Preston Martin and Brian Teague Williams were unforgettable as young Russian artists. I felt lucky to be with them in the audience for the thought-provoking, shocking, bawdy shows. I imagine if the great, bold playwrights of the past Euripides or Shakespeare had been sitting next to me there, they would have felt lucky too, and right at home.

What was the last theater show you saw that was “alive”?

You may also be interested in: Evolution of Theater, at https://jjbrownauthor.com/2012/03/27/evolution-of-theater-at-the-mentor-project-nyc/

6 thoughts on “A Theater Grows in Brooklyn”