Short Story Excerpt from Death and the Dream by J.J.Brown

It’s been a hot, dry summer in Horseman’s Valley, deadly quiet, nothing for a ten-year-old child from the city to do. Sandy makes her own games while she waits for her mother to come take her back home to their old neighborhood in Brooklyn.

Sandy sneaks out of Auntie’s house and races in the full sun across a wall of cement blocks behind the old family home that’s nestled at the base of the valley. She stops, kicks off her worn leather moccasins and wriggles out of her T-shirt. Bare-chested, she throws the shirt and it lands in the dry, brittle burdock and thistles, weeds as tall as she is.

The shirt lands beside Auntie, a muscle-bound, working woman of about thirty-five. Auntie digs a ditch with an enormous square shovel along the cement block wall. She’s in a tank top, jeans, heavy gloves and leather boots. Auntie hears the shirt land on the weeds. She hears the crackle of the brittle stalks snapping. She flips her short black hair back out of her eyes. She’s dripping with sweat.

“Sandy,” she yells, “put your shirt back on. What the hell’s wrong with you? You crazy?”

Sandy enjoys irritating Auntie as a way to pass the time. She reaches over and grabs Auntie’s denim jacket from where it lies beside the cement block wall.

She thinks, “It’s a game we play together.”

Sandy pulls the jacket on over her bare chest, jumps off the wall, ducks under the wooden fence and races away through the neighboring field, the horseman’s field.

“I’ll tell your mother, damn it,” Auntie calls after her but the girl is gone. “Crazy kid,” Auntie says to herself and goes back to digging.

Sandy runs past serene grazing horses, she runs past the quiet empty barn. Her feet ache from the jabbing rocks and stubble but she keeps running until she is breathless. She stops and bends over, holding her knees to catch her breath. She has reached a stand of tightly packed cedar trees in the center of the horseman’s cleared field. It serves as a trotters’ practice course in the summer. And it’s the perfect hiding place. Sandy crawls in beneath the thin and frail lower branches of the cedars and waits. She waits for the horseman to come. Sandy enjoys spying on the horseman, to pass the time as she waits to go home and play with Marco in the city.

It’s a game I play alone.

In this secluded and hidden place, sunlight filters through the dense branches in dusty shards, cutting through the quiet darkness in a lifeless dance. Spiders and their webs crisscross stones covered with blue-green moss. The spongy floor beneath the cedars is layered with dry needles from countless seasons past. Sandy collects new pliable needles into bundles and builds fragile sheds. She arranges pale blue cedar berries inside them, playing house. Auntie would never be able to get through the low scratchy branches to this beautiful, soft and safe hiding place. Sandy is sure of it.

The old horseman comes. Sandy hears his boots crunch through the dry grass patches along the open field and come toward the cedars. It sounds like he brought one of his horses who pulls the creaking trotter’s buggy. Sandy sees the horseman stop just beside the circle of cedars. He takes a small silver flask out of his jacket. She hears him drink and cough.

Hide from the horseman, hide and no seek.

Sandy shifts away from the light filtering in through the cedars. Scruffy, bristly, the horseman reeks of tobacco but also faintly of starch-pressed shirts and bay leaves. He smells like she imagines a man should, though she’s never smelled a grown one up close. His hair is white and short all over, as if recently shaved. His skin is deeply tanned and covered with fine wrinkles. He talks softly to his horse, Star, and pats the horse’s beautiful, shining shoulder gently. Sandy listens from behind the cedar branches for news, news of the city. She longs for news—not television news, real news.

“Oh, goddamn it, Star,” says the horseman and he coughs long and loud.

Sandy tries not to breathe and pulls her knees up close to her chin.

“What would you say, old buddy, if I told you a story. You won’t believe it, that I’m sure. In the city we walk down underground. We walk down into tunnels, crammed in back-to-back like old logs of timber. What would you say to that?” The horseman coughs violently.

Star is black with a white star-shaped mark on his forehead. He used to be a prize-winning trotter but now he’s out to stud. Star has long, silky hair and his mane and tail are always perfectly brushed. He is cared for, he is loved.

“Right down into tunnels, under the ground,” the horseman repeats. His voice is low and husky from years of smoking hand-rolled cigarettes without filters.

Star turns his regal head away and shakes it, stomps his front hooves.

“No, none of the horses go down in the tunnels. No animals at all, just the people,” the horseman pats Star’s neck and looks up at the hills surrounding his field. “Though they do get a few horses to go around the park. It’s for the tourists mostly. They shouldn’t, you know. Not good for the hooves. Not at all.”

Horseman can understand his animals.

The horseman knows all about these things. Sandy’s mother said he made the field into a race track of sorts all by himself. He ran his trotters around it with the buggy to get them ready for the Saratoga races upstate each summer. Star won some of those races, she’d said. These were races Sandy was not ever allowed to go see.

“Every day, we ride the underground train.” The horseman coughs over and over and then continues. “Some of us damn fools ride for, oh, up to an hour. Now can you believe that? Goes in a track, runs in a circle. Just like you. Go down under there to get to work. Get out on the other side of the tunnel, up out of the ground.” The horseman kicks the dirt where Star stomped, and he spits on it. “Goddamn fools we are,” he pauses. “The city. You know it’d take three days for me to get there from here, walkin’? Probably take you two. One, maybe.”

It would take three days to get home, walking.

Sandy sees tobacco-stained spittle fall and glisten in the sunlight like amber. The horseman looks up at the sun on the hills and the thick forest of pine beside them. He loves the valley. She thinks he could be her grandfather if they ever spoke, but they don’t speak.

“Crazy, huh?” he asks Star and laughs with a wheeze.

Star snorts. Sandy sees the horse spit hang from Star’s chin and drip down to the dust at his hooves. Star’s perfectly groomed, black hair glistens and his skin shivers in the sunlight as he swats his long black tail across his flanks. She could probably ride him if they would teach her how, but they don’t.

The horseman takes out a hand-rolled cigarette from a beautiful silver case. The metal catches the sun, glimmering in Sandy’s eyes. The horseman strikes a match, lights the cigarette and throws his matchbook into the cedar stand. It lands right at Sandy’s bare feet. She pulls her feet away reflexively. Smoke curls around the tree branches, sweet and pungent from the horseman’s special tobacco. He walks Star off very slowly with the squeaking buggy.

Sandy stares at the matchbook. She carefully picks it up and looks inside at the remaining matches. She closes the matchbook and puts it in Auntie’s denim jacket in the front breast pocket. The jacket chafes against her bare skin. She plays with the pine needles at her feet, tears down spider webs with packs of dry brown needles. She pokes an abandoned wasp nest with green pine needles. She’s waiting until the horseman and Star can no longer be heard.

Sandy takes the matchbook back out of the jacket pocket. She opens it, strikes a match and watches it burn. The beauty of it, the scent, the way the colors change and merge. When the heat reaches her fingers she tosses the burning match through the cedar branches into the dry field. She strikes another and another until the matches are finished.

Sandy emerges from the cedar stand by crawling out slowly on all fours. The field smolders in front of her. The dry grass has caught fire in tufts surrounding the cedars. It is as beautiful as each match was—white, blue, yellow, red and smoky. Patches are already burned to the ground. Black and white ash drifts along where the dirt is bare of grass. The wind carries the fire racing along the field toward the forest and transforms what was beautiful into something terrifying. The base of Horseman’s Valley fills up with smoke. Sandy runs back to Auntie’s house ahead of the blaze.

Auntie is on her cell phone when Sandy pushes in the door. She leaves the door open and stands there panting. Auntie has a wet towel around her shoulders from the shower, her back to Sandy. Auntie fusses with a vase of fresh cut flowers on the table.

“No, I mean, we don’t have another car,” Auntie continues. “Nope,” she says, tapping the vase of flowers on the table repeatedly. Pause. “Why, you don’t like it? What do you mean? No one likes the subway, but it’s right there. What about the bus?” Auntie asks and listens for a long time.

Sandy steps between Auntie and the phone. That call should have been for Sandy. She puts her hands on her hips. At ten, she only reaches Auntie’s shoulders in height.

“She doesn’t like the subway,” Sandy says defiantly, still out of breath.

Auntie tries to smile. “No? Why not?”

“Because,” Sandy crosses her arms over her chest, “because she likes horseman’s Star, that’s why. She’s coming right back here to ride the horses.”

“You know that was your mother on the phone, right? She’s…what’s that smell?” Auntie asks, distracted.

“Give back my jacket,” Auntie says, suddenly irate, her hands shaking.

Keeping the jacket. Taking this one thing from her.

Sandy takes the empty matchbook out of the jacket pocket and throws it at Auntie. The matchbook lands at her feet.

Sandy is already running out of the house. She runs up to the top of one of the hills flanking Horseman’s Valley. Three days, the horseman said. She can make it back home to her mother in three days. Smoke drifts in through the open door of the house she leaves behind her. 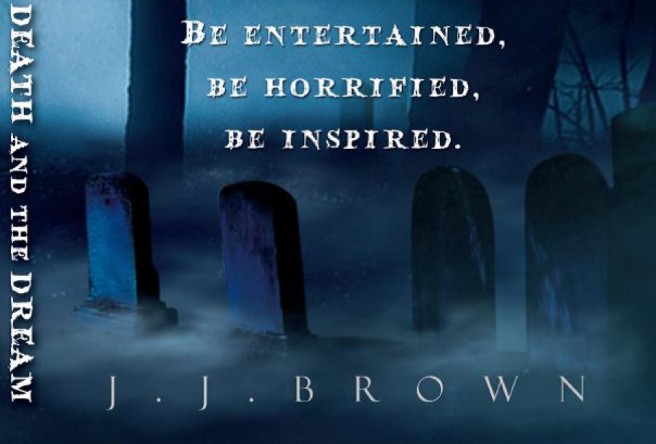 Storyteller, public health advocate, and author of: Mosquito Song, The Finest Mask, Distracted by Death, The Doctor's Dreams, Vector a Modern Love Story, American Dream, Brindle 24, Death and the Dream, Stream and Shale and others. Find J.J.Brown stories in print and ebook editions at most places books are sold. View all posts by J.J.Brown Author

5 thoughts on “Summer Off – a Short Story”