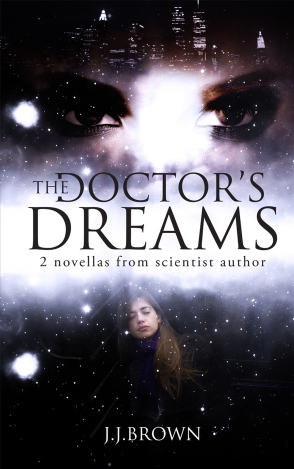 Dreams are the exclusive property of the dreamer.

But if you found a loved one’s secret dream book, might you be tempted to read it? In my book, The Doctor’s Dreams, a lonely man faces this decision while killing time, home alone on New Year’s Eve.

His sister, Doctor Marsha Arzt, has mysteriously gone missing somewhere between Manhattan and Brooklyn. Just after midnight, while looking for clues, Frank discovers she kept a hand-written dream diary. It unnerves him, but he can’t stop reading, under the pretext of typing up the dream book to help her organize.

Her nightmares seem to predict a future he isn’t willing or able to face, and certainly not alone in the wee hours of the morning.

Here’s an excerpt, the third of her dreams in a macabre series.

December 23. I dreamt of surgery.
The last thing I saw on the way home from work on the M line was an advertisement on the walls of the train car. It was under a glossy, dark blue photo. The ad copy read, ‘Because it’s your other 9 to 5’. I had no idea what that meant. Sleep, maybe. Sleep is my other nine to five, though it is somewhat shorter, more like twelve to six on days when I am not on-call at the hospital. When I am on-call, I have only an hour here, an hour there to sleep.

The setting sun reflected along the surface of the East River between Manhattan and Brooklyn. The water looked like a stream of pure gold when I closed my eyes. By the time I woke up it was dusk. The train was no longer crowded and I was deep in Brooklyn, well past my stop. I must have fallen asleep somewhere on the Williamsburg Bridge crossing. I imagine it was around six in the evening. When I realized where I was, I got off at the next stop and transferred to the train going the opposite direction, to retrace my path.

I remembered the dream and wrote it down on the way back home. It went like this:
“What about your other nine to five?” A disembodied voice asked me as I slept. “Have you been preparing?”
“For what?” I asked.
“What is to come,” the voice answered.
“When do I have time to prepare?”
“The other nine to five, that is your time. I gave you more than 12,000 nights in these thirty-five years to prepare, countless hours and more than a million dreams. What have you done with these hours? What have you done with these dreams?”
I could not answer.
“Are you ready? Have you prepared for the end?”

Frank froze. He hadn’t thought of preparing for the end—did anyone, he wondered?

Throughout the novella, Frank goes progressively deeper into his sister Marsha’s nightmares. What they reveal about her emotional experience working as a doctor, convinces him that the two of them need to make a change.

The Doctor’s Dreams is now available in print and ebook editions.

Won’t you leave me a review at your favorite book retailer site?