Because our fathers were soldiers, on Memorial Day some of us – and I – will think of lives lost in the wars today. Memories flood in of family, friends, and strangers too lost in the conflicts of the past, and risking their lives in the ongoing military campaigns of today. 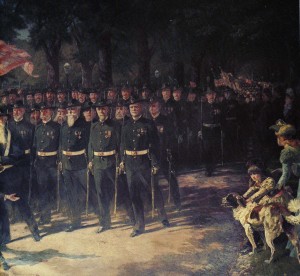 Because our fathers were soldiers, we think about war. I think about my father’s and his brother’s self-sacrifice when they went into World War II. My father survived, but his brother lost his life in Germany, as 15 million did throughout the world in battle deaths during that war. I can’t imagine that I understand their decisions and what it meant to them as men to join the war as soldiers, but above all I think that they must have put something – hope – out in front, ahead of their own personal lives. They valued and acted on a purpose valued above even their own survival.

My father would tell us how he and the family heard through the media and letters home about atrocities going on in Europe, things that they could not ignore. There must have been a determination inside them to make the world better, to make things right.

When I remember the soldiers in my family, a host of nightmares comes along too, like a cloud – because when my father survived the war he brought his impressions and stories back with him, as much a part of him as his own skin. While he served, he learned about other places and cultures – Japan and the Philippines –  during his time in the army. But because this time was one of collecting the pieces needed to heal fragmented lives of the ending of a war, those days were remembered as tragic. The tales he told during my childhood were not of making things right, or of honour, not of success – but of horror. Wartime experiences most often came up after dark, when he was tired. And as a child I came to fear the dark, but more than anything, to fear war.

My father’s wartime stories also came out during the bright daylight hours when visiting with his friends who were World War II survivors like him. After a trip to a junk yard where my father and another man walked slowly and discussed old car parts, I remembered the short, older man’s hands and how his fingers were thick and the nails looked odd. When I asked him about it on the way home, my father told me that the man had, with only his hands, dug his way out of a concentration camp under a fence during the war, in Germany – and escaped. That day, I remember how they were so relaxed, standing in the sun together, so free.

At that moment, looking up at this weathered face in the sunlight, I understood that freedom had everything to do with why my father went to war. He gave up his own freedoms for those years, but was thinking about someone else’s.