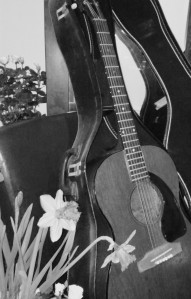 On the premier episode of ScienceFirst, my new radio show at the Artist First Radio Network, guest, psychologist Gary Marcus demystified the science of learning.

Cognitive scientist and best-selling author Gary Marcus always had an interest in science, dinosaurs and astronomy as a child. But it was his interest in computers that led him to caring about how the human mind works. Gary Marcus is now an award-winning professor of psychology and director of the New York University Center for Language And Music, where he studies evolution and language. His most recently published book is a New York Times Bestseller, Guitar Zero, which reviewers describe as “Jimi Hendrix meets Oliver Sacks”.

As an adult, Gary wanted to learn to play guitar. He fell in love with playing guitar and wrote “Guitar Zero” about his journey to become musical. Gary doesn’t necessarily think we are born with a musical instinct. He writes, “Great musicians, like the tallest plants, need optimal conditions: ideal genes and ideal environments.”  He learned to play guitar as an adult by immersion. And he was able to overcome his own congenital arrhythmia by dedicated, even obsessive practice. He even wrote an App, “Chatternome” to help people count while practicing a musical instrument.

The book became a best seller, and Guitar Zero has evoked an emotional response in readers. Many were inspired to pick up a musical instrument, starting to play as adults. After reading his book, I was convinced that anyone can learn to play a musical instrument at any age, if they have a passion for it, and daily practice.

I talked with Gary at Artist First Radio Network – about evolution, music, and learning to play the guitar – and the show is now available “on-demand” at: http://www.artistfirst2.com/ArtistFirst_ScienceFirst_2013-04-03.mp3

For more about Gary Marcus books, please visit his website and connect with him on twitter @GaryMarcus

Have you picked up a musical instrument as an adult? Please add your comments to share views with the WordPress community, and I’ll look forward to hearing from you.

© Jennifer J Brown and J.J.Brown Author. Unauthorized use and/or duplication of this material without express and written permission from this blog’s author and/or owner is strictly prohibited. Excerpts and links may be used, provided that full and clear credit is given to J.J.Brown and J.J.Brown Author with appropriate and specific direction to the original content.
%d bloggers like this: