At the summer solstice I was thinking of Samuel Peralta’s hot new poems. I know him as “Semaphore”, his twitter persona, where he placed #1 worldwide in the voting for the Best Poetry on Twitter. His “Sonata Vampirica” poem story was released and devoured by ebook readers. He was also awarded the Palanca Award for “Pacific”, and has garnered awards from the BBC, the UK Poetry Society, and the League of Canadian Poets, among others.

First of all, I’d like to thank you so much for inviting me to your blog, it’s always a pleasure to step out from behind the curtain, so to speak.

Why is a physicist becoming a poet, or did the poet come first, then the physicist?

Poetry started first, when I was very young, perhaps eight or nine. I wrote rhymed quatrains on a small spiral notebook that my parents had given me, about the usual things at that age – friends, nature, anything that came to mind. When I grew up, that love of nature and science turned into a career as a physicist. Eventually I went into the business mainstream, directing larger and larger projects and even founding start-ups of my own. Although I was always writing, poetry took second place during that time. As business life began to be more hectic, I re-discovered the arts as a means to balancing my life, first music, songwriting, and then finally my first love, poetry.

How did you select the unusual name, “Semaphore” for your writing persona?

As it happened, I re-booted my literary career on Twitter, early when social media was just taking hold. I had this idea that instead of tweeting “I’m at Starbucks now, great frappucino” or “Loved the new Batman movie” – which no one else but my friends might be interested in – I would be a little different and tweet poetry, or links to poetry, be all about poetry. At the time Twitter could display no pictures or video, and had a limit of 140 characters per message, or tweet. “Semaphore” – a method of sending complex messages using flags – was a perfect name, because poetry – and Twitter – was all about packing a lot of meaning in few words. Poetry is semaphore, and now @Semaphore would be poetry.

What is the new media literary renaissance?

Among some, there is a lingering suspicion that all new media writing – on social media, blogs, ebooks, digital journals – somehow falls short of the standards of conventional literary fiction, journals or in academia. This perception continues with the democratization of publishing, where the standard filters of literary tradition are no longer an impediment to widespread distribution of writing, any writing. But there is a literary renaissance brewing, where writers with classical training are beginning to turn to new media not as an alternative to traditional media – but as their first option. I believe that, very soon, the best literary works available will be available first in digital format.

Your poetry is striking, both physical and passionate – do you think of your work as literary, classic, popular?

I consciously shape my work to be all of the above. I work from a literary and classical tradition of structure, symbolism, allusion, and levels of meaning; but I believe that poetry should first elicit a visceral, emotional response, what some people would term ‘popular’ poetry. But after that first response, I intend a second reading be one of discovery, where the reader sees things they may not have realized was in the poem in the first place.

When did the story of “Sonata Vampirica” come to you?

The background to “Sonata Vampirica” is in the Afterword of the book, so I’ll quote from that in answer. Inception was when a friend and mentor, author Ellen Hopkins, and I were talking about vampire stories. I’m a solid admirer of Anne Rice’s work, and wondered out loud about how a serious poem about the mythology would be taken, in the face of current, and much less dark, interpretations. Ellen was already familiar with my past work fusing myth and metaphor. Right away, Ellen said, “You should do it.”

Around the same time, another friend and poet, Courtney Ray, had challenged me to write a poem about a deadly sin, any deadly sin. For days I had been doing research and writing drafts of poems dealing with all the deadly sins – lust, gluttony, greed, sloth, anger, envy and pride – and all this was raging in my head at the time Ellen and I were talking. The confluence of that research and Ellen’s new challenge plunged me into nine nights of terrifying dreams, and resulted in the first sonnet, ‘The First Deadly Sin’. The next milestone came when I decided to let the victim talk back. With that epiphany, the structure of “Sonata Vampirica” became a dialogue between the vampire and his victim, and that tension – not knowing who will prevail in the end – became the driving force of the story.

What is the origin of the striking tattoo photo, artist, model, for the cover art of Sonata Vampirica?

Several vampiric archetypes existed at the time I wrote “Sonata Vampirica” – the classic Dracula or Nosferatu, Lestat from Anne Rice’s tales, Edward from Stephenie Meyer’s novels. My conception of the vampire was very different. While writing “Sonata Vampirica” I realized that that there is one real-world relationship that mirrored the attraction-repulsion relationship of a vampire and his victim – that of abusive relationships. That concept melded with my creation of a persona that was both sexually attractive and dangerous – the Tattooed Man. When I realized it, I knew this was to be my new vampire archetype, something that had, to my knowledge, never been seen before. I’m quite proud of that creation, actually. 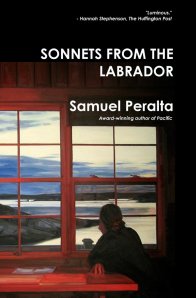 Which new projects of yours are closest to your heart?

My second Kindle book “Sonnets from the Labrador” is a collection of poems inspired by the art of David Blackwood. It hit #1 on Amazon Kindle Hot New Releases in Poetry, and has peaked – without promotions – at # 28 on the poetry bestsellers charts. It’s special to me for many reasons, which I go into in the Afterword of this book, ‘Flags and Semaphores’, an essay on art, poetry and inspiration.

My next collection – and you and the readers of this interview will be the first to hear about it – is a collection of love poems, and will be called “How More Beautiful You Are”. The art work for this book has just been completed, and my publishing house, Windrift Books, is planning a release by the end of July. This will probably be my most personal book so far.

Where can readers and poets find your work?

My books will be where all my new poems will be collected – currently they’re available on Amazon, at http://amazon.com/author/samuelperalta. I’m on Twitter, as @Semaphore, and am currently tweeting monostiches, single-line poems. My main blog “Semaphore” is on www.samuelperalta.com. Those are the main channels for my work, although I’m also on Facebook, Pinterest, Fictionaut and GoodReads. I wanted to mention “The Semaphore Anthology” – http://semaphoreanthology.tumblr.com – which collects work from other poets, work I wish I’d written. I hope your readers will find something of interest in one of these venues… and thank you again for the invitation to talk in your blog, it’s been a pleasure!

Thank you Samuel for sharing your thoughts and poems; I’m looking forward to reading “How More Beautiful You Are.”

Storyteller artist, author of : The Doctor's Dreams, Vector a Modern Love Story, American Dream, Brindle 24, Death and the Dream. Born in the Catskills, J.J.Brown lives in New York City. She has science research background and a PhD in Genetics. Find her stories in print and ebook editions at most places books are sold. View all posts by J.J.Brown Author