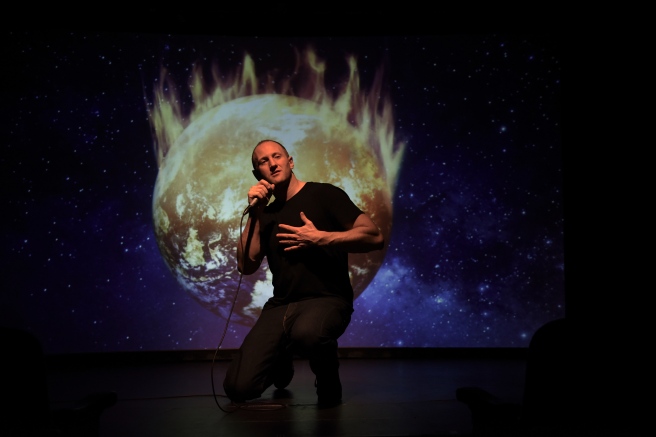 I caught the performance live at the Soho Playhouse. In the audience we had hands in the air, calling back at him, and hooting with laughter. Best of all, we were leaving with good ideas about how to get personally involved in the climate chaos debate.

A favorite of mine in Brinkman’s show is the ironic “rockin’ a solar powered Tesla”.

Alternate views about climate change were also part of the performance, with ideas from renowned scientists like Freeman Dyson.

The show is advertised as peer-reviewed rap, with climate experts weighing in on the lyrics. It covers the rich history of scientific discoveries about the atmosphere, industrial pollution, and our warming planet. And at the intermission, scientist Adam Sobel joined onstage to answer audience questions. Dr. Sobel is Professor in the Department of Applied Physics and Applied Mathematics, Department of Earth and Environmental Sciences, and Lamont-Doherty Earth Observatory at Columbia University in New York City. You can also find him on twitter @profadamsobel.

The night I went, audience questions ranged from whether climate change causes severe storms, to how we can get involved, and who’s the best presidential candidate on climate issues. With the New York primary coming up, many of us in the audience will be making that choice soon.

Baba spun the question topics from the Q and A into a new freestlye rap about how freedom isn’t really free, along with an in-depth look at what a carbon tax would be.

I’ve enjoyed Baba Brinkman’s passion for storytelling in his bawdy Rap Canterbury Tales and hilarious Rap Guide to Evolution. But this latest show is his best, and so different because it’s not only clever, but directly related to taking action. After the show, he and Dr. Sobel were around for discussions, and handouts showed how we could get involved locally and globally.

If you’re in New York city, catch the Rap Guide to Climate Chaos at the Soho Playhouse. It’s playing on the main stage, extended through June.

I went with my daughter Lillian Isabella for the fun of Baba Brinkman’s shows and hoping to learn something. And we heard so many things about climate that we didn’t know before, it’s true, but we left wanting to do something.

To find out more about climate chaos and public health and what’s going on near you, check out food and water watch and 350.org.

For my personal take on climate chaos and our public health, check out my novel Brindle 24, the last day in the life of a town.

Storyteller artist, author of : The Doctor's Dreams, Vector a Modern Love Story, American Dream, Brindle 24, Death and the Dream. Born in the Catskills, J.J.Brown lives in New York City. She has science research background and a PhD in Genetics. Find her stories in print and ebook editions at most places books are sold. View all posts by J.J.Brown Author